We’ve all heard about the power of positive thinking.

“Self-belief can do wonderful things.”

“You can do anything if you put your mind to it!”

“If you believe in yourself anything is possible.“

Scientists have finally found some evidence that these mildly sickening adages may actually be worth more than you think.

In a massive study, Professor Andrew Lane from the University of Wolverhampton (in collaboration with BBC Lab UK) tested the efficacy of a number of motivational techniques for improving task performance.

You’ve probably used all of these techniques at one time or another. Think back to the first time you asked someone on a date (unless you’re lucky enough to always be the ask-ee). If you ranted at yourself in the bathroom mirror like a lunatic before asking the big question, you were using self-talk. Were you picturing yourself asking the question as if you didn’t care what their answer was, just to seem that bit more desirable? Imagery at work. You may have even made a deal with yourself to make sure you went through with it. ‘If I see them in the school hallway, then I’ll definitely ask them out’. That is an implementation intention, or more simply, an if-then plan.

Over 44,000 participants were recruited and asked to employ one of these three motivational techniques whilst playing a competitive online concentration game (kind of like this one).

The three motivational techniques were then applied to one of four goals relating to different aspects of the game:

Participants played the game 4 times. Firstly they had a practice attempt, and then they went again to get a baseline measure of performance.

After their baseline proficiency had been assessed, the participants watched one of 13 videos which trained participants in their specific technique (e.g. using self-talk to achieve an outcome-goal). For a bit of extra motivation (and, I think, just because they could), each video starred world-record-breaking Olympic sprinter Michael Johnson (not to be confused with basketball player and space-jam aficionado Michael Jordan).

After watching the video the participants attempted the game again and completed some self-report measures of performance. They then watched the video for a second time and played the game for a fourth time.

Finally they were given personalised feedback in a video which was again presented by Michael Johnson. 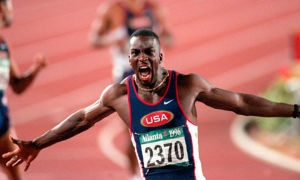 After a complex statistical analysis the researchers discovered a number of very interesting findings.

For those of you who like to have juicy bits served to you on a platter, scroll down for a brief summary of the findings. For the hunter-gatherers amongst you, read on.

There are quite a lot of results, so take a deep breath…

Time to complete the task

Phew. And that’s not even all the nitty gritty results.

So what does it all mean?

These results indicate that there are very real ways one can train their brain to improve performance on specific tasks. Giving yourself a good talking to and ‘visualising’ yourself achieving your goal both seem to be very effective ways of enhancing your likelihood of achievement.

A computer game, of course, is nothing like real life (though mood diamonds floating above everyone’s head would be splendid). These results in no way suggest that self-talk and imagery will help you to get a date, but for that online chess tournament,you might be onto a winner.

To find out more about how you can use the power of thought to succeed, take a look at the original journal article published in Frontiers in Psychology.